Selenium as SelenoPrecise with selected antioxidants

More than 25 years on the Danish market!

Directions
1 tablet daily, unless otherwise advised.
Preferably during / after a meal.
The dietary supplement is not for children under 3 years.
Do not exceed the recommended daily dosage.

Dietary  supplements should not replace a varied diet.
A healthy lifestyle and a varied balanced diet are important for maintaining good health.

Storage
Dark, dry and at room temperature. Keep out of reach of young children.

Bio-Selenium+Zinc consist of tablets with the ingredients selenium, zinc, vitamin A, vitamin B6, vitamin C and vitamin E. The antioxidants in this unique complex that have been on the market for more than 25 years, supports, protects and complements each other, and their co-operative actions and high quality makes Bio-Selenium+Zinc the ideal antioxidant complex. Bio-Selenium+Zinc may also be used as an alternative to multi-vitamin preparations containing beta-carotene, which smokers may wish to avoid.

Bio-Selenium+Zinc contains 100 micrograms of selenium in the form of Pharma Nord's patented organic and easily absorbable SelenoPrecise selenium yeast. SelenoPrecise contains 67% selenium-methionine and 33% various other forms of selenium, which corresponds to the selenium forms we get from a diet rich in selenium. As much as 89% of the tablet's selenium is absorbed. Absorption and effect appears to be further increased when the selenium is combined with vitamin A, B6, C, E and zinc, wich are also organically bound. 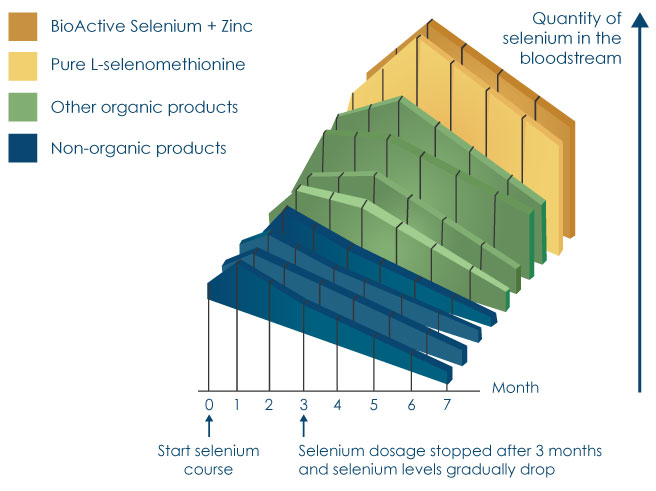 Selenium as an Active Pharmaceutical Ingredient

Today, Pharma Nord is the only manufacturer in the world that has an approval to produce organic medical grade selenium yeast. This completely unique, patented medical raw material is used as a medicine in Denmark under the name SelenoPrecise, where the indication is prevention and treatment of selenium deficiency. All Pharma Nord's dietary supplements with selenium contain this original selenium yeast.

Bio-Selenium + Zinc contains many different species of selenium, each of which has been shown to have different functions in our body. By supplying the body with a wide range of selenium species, it is possible to emulate the natural selenium variation found in a versatile diet. This means that the different selenium compounds can follow different biological pathways in the body and remain in the blood for varying periods of time. This is believed to have the greatest health benefit. Among the advantages of organically bound selenium species from selenium yeast are a higher absorption and bioavailability than from both inorganic selenium forms and synthetically produced selenomethionine.

Production of homogeneous selenium yeast meaning it is similar from production batch to production batch, so that it qualifies for use as a medicine, is a difficult task. There are several reasons, not least that the tolerance requirements are so small. Thus, the permissible quantity deviation from the declared amount of selenium is very small, and at the same time, the content of the raw material of the different selenium forms must be similar from production to production. It makes sense, because of course you have to be able to count on being able to get the same effect from every single tablet.
Pharma Nord's selenium yeast contains more than 20 different selenium species, the content of organic selenium methionine selenomethionine is stable at 67%, and the proportion of inorganic selenium will not exceed 1% of the total amount of selenium.

In analytical studies of SelenoPrecise selenium yeast, these selenium compounds have been identified:

The selenium yeast is then pasteurized, whereby the yeast cells die. The selenium-containing yeast cells are centrifuged, washed, frozen, pulverized, spray-dried, and compressed into tablets.

There are distinct advantages to taking API selenium yeast compared to taking other selenium forms.

What are antioxidants and free radicals?

Antioxidants are substances that are able to neutralize free radicals which are chemically unstable molecules attacking everything around itself in a chain reaction. Both cell membranes and cell nuclei can be attacked whereby the cells are weakened and fatty acids are oxidized, that is, becoming rancid. We can not avoid free radicals because they are a natural consequence of our metabolism and are a consequence of, among others, stress. In some contexts, however, they also perform useful functions, but we continually need the protection of our cells, genetic material and fats against the unbridled mayhem of free radicals so that we can maintain the body's normal cellular functions as long as possible.

The European Food Safety Authority (EFSA) has evaluated the evidence behind the active ingredients and has acknowledged the following claims: